My Sisters A Slut 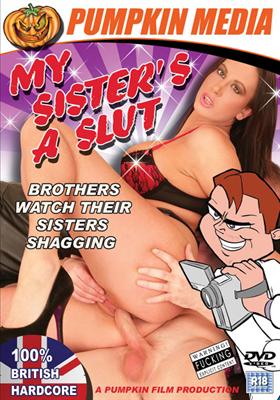 View all films from 'Pumpkin Films'

Sex mad couples are up for some hard fucking, only to realise they're not alone in My Sister's A Slut! To their horror they've not only been watched but filmed too - and by the pervy brother and his new toy, a video camera! Sasha Rose can't get enough cock and with her useless brother out of the way, or so she thinks, she has her cunt pounded by her boyfriend in the living room, only to find out later that her antics have been caught on camera for all to see! Up in the bedroom, Krystal and her boyfriend have escaped from her brother Matt and his much loved video camera. Krystal and Stacey enjoy some hard fucking until she catches her wanker of a brother filming them in action! Dan is filming for a website at a car dealership at the same time as his sister Maisie is getting to know colleague Matt. As Matt screws Maisie's hairy snatch, Dan is spotted with the record button on! Emma has missed her boyfriend Jig so much she is longing to fuck him, but has to get rid of her brother and his new camera first. Emma fucks Jig senseless only to be disturbed by her pervy bro - who has not only watched, but filmed them! Jobless Terry has nothing better to do than to play with his new camera, so when his sister Valentina and her boyfriend head off to the bedroom, he can't resist the urge to sneakily film them fucking! My Sister's A Slut is the poignant opinion of most brothers, but to film her having sex is filth of the highest degree! Don't ya just love it

First Time Babes 2
Check out these UK film virgins as a cameraman and two big dicked studs visit them in their homes. These amateur babes tell us why they want the whole country to see them suck and fuck strangers. Five very sexy innocents dress up in their sexiest gear, get their nipples and tits played with, have guys licking their wet pussies and in return give deep blow-jobs. We get nice foreplay before they get shagged in every position including up their puckered arseholes. Lots of spunk flying about with cum in mouth, swallowing and facials. Good quality very hot threesomes! Top film!...
£23.00

Gay Weekend 1
Gay Weekend is set at a country ho retreat. After an opening pairing, there is a great duet between the ng cover model and his friend in which they flip-flop fuck and shoot big loads over each other. An outdoor three-way is next with a train fuck before a duet and a final three-way finish, another great offering from S.E.V.P....
£21.00