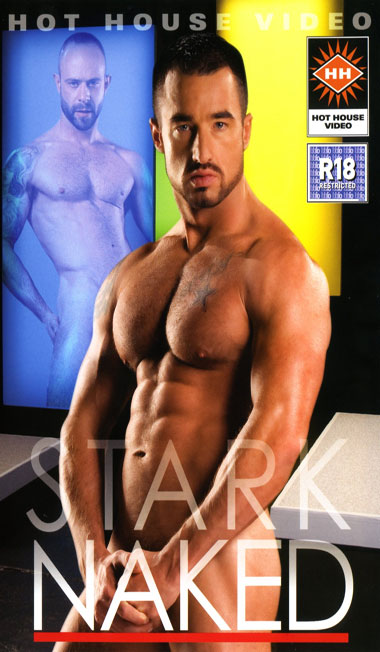 When you've got a collection of horse-hung studs with raging hard-ons ready and waiting, there's only one way to see them in action - Stark Naked! Scene one opens and sets the tone for the entire movie with C.J. Knight and Ross Hurston standing Stark Naked, making out on a raised platform. The two chiseled hunks move from sucking face to sucking cock, taking turns working each other over. Knight flips Hurston over and begins eating his ass, then, for the first time ever on video, Knight mounts Hurston and fucks his big round ass! The action turns into a flip-flop fuck when Hurston rolls over and Knight mounts his huge rock hard cock. Knight gives us a classic reverse cowboy before jumping off and shoving his cock back into Hurston's hole. Knight pounds Hurston like a sex-crazed maniac - he throws one hell of a mean fuck! Finally Knight pulls out and joins Hurston as they both jack off and shoot their loads all over Hurston's rock-hard abs. Dillon Crow gets on his knees and sucks Tyler Saint's huge cock; but Saint has another idea and bends the willing bottom over, eat his ass, then pound his big white round butt! Crow takes it from all angles until both men finally lay back and work their loads out together. Nick Piston and Johnny Gunn make an eager middleman out of Jake Dakota. Stark naked and on all-fours, Dakota starts servicing Piston's fat cock. Hung newcomer Gunn stands watching, stroking his huge meat. The two top men take turns feeding Dakota their cocks until Piston finds his way to Dakota's round ass. After eating the puckered hole, Piston shoves his cock in to the base. After pounding his hole, Piston flips over and shoves his round bubble-butt in Dakota's face, allowing Gunn to take his turn fucking Dakota's ass. Wait until you see all three men shoot their sticky loads all over Dakota's hairy torso! In scene four Jackson Wild shows off his amazing cock sucking skills as he swallows Kristian Alvarez's 9+ incher. After fucking Wild's face, Alvarez flips him over onto his shoulders so he can taste Wild's puckered hole. He fills it with spit, getting it ready to take his rock hard cock. Alvarez lays on his back and Wild jumps on for a rocking reverse cowboy. The fucking continues with Alvarez pounding the willing bottom's ass. Wild jacks off his own fat cock until he shoots his load all over his washboard stomach. Soon Alveraz blows his load, adding to the puddle on Wild's chiseled abs.

A Body To Die For 2
A murder mystery from the Studio 2000 team. Hot sex with a good story. A cop gets involved when two gay men get murdered. What he hasnt told his bosses is that hes having a gay affair but hes not happy. He soon meets new men as he investigates and he gets down to probing their buttground. Hard rugged young men who will lick the sweat off your balls before blowing you, and then directing your hard cock to their puckered arses. Well made feature film with all the fucking and sucking you could want. Rick Chase, Jon Eric and Joey Hart are among the studs....
£12.50

George
George is one classy DVD! Beautifully shot with a cast of Hungarian studs to die for and the super luscious George Vidanov, one of Private's biggest gay stars, fronting and bottoming! Muscled, tanned bodies, good looks, perfect pricks and rampant sexuality, all combine to produce a movie that will make you want to watch it over and over. Each scene is titled. For example, 'How to get a blow job' and the settings, whether an apartment or a Roman Villa are lavish. There is a standout set in a steamy Roman baths, where the Nico, the Emperor's favourite, is punishing some dissident Senators....
£12.50

The School For Lovers
Two young couples, one indecent proposal! Lucas Kazan's The School For Lovers recruits an international ensemble (Italian, Czech, Venezuelan, Hungarian and Brazilian) and uses a number of stunning locations in Southern Italy. Ferrando and Guglielmo trust their lovers blindly, but Alfonso bets they're like everyone else. Ferrando and Guglielmo agree to do whatever Alfonso wants for the following 24 hours. Unaware of their lovers' plot, brothers Dorino and Fiorino lounge poolside. Alfonso sets out to test the brothers' vows. He will seduce Dorino, who succumbs all too easily and summons Despino to win Fiorino, who's determined to resist. Alfonso grows impatient. While Despino plays one last card aided by hunky Samuel Dolce, Alfonso relieves his tension and watches a dvd. In the morning, Fiorino gives in, Alfonso consoles the pair and claims his prize. He orders Ferrando and Guglielmo to strip and reminds both they had agreed to be his slaves. Dorino and Fiorino spy on with a smile. Happy is the man, they realise, who takes everything to good account....
£24.00