To Protect And To Serve 1 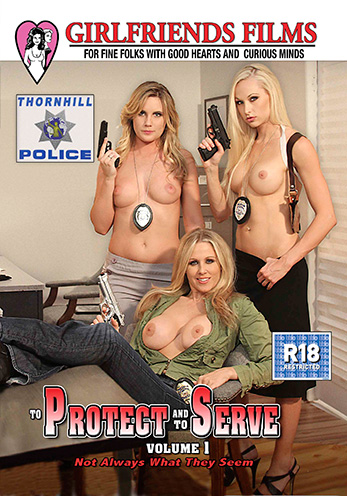 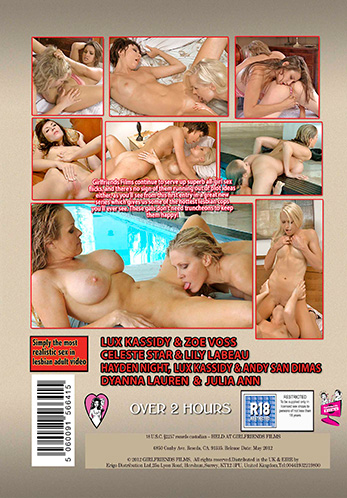 View all films from 'Girlfriends Films'

Based on the real-life stories written by a career LAPD cop, To Protect And To Serve 1 features Julia Ann, Lux Kassidy and Hayden Night as lesbian cops trying to make a difference on the street, while maintaining some semblance of a love life. Bobbi Starr is devastated after fellow officers were killed at a robbery call that was intended for Bobbie. Julia Ann does her best to make this rookie feel better. Illicit and illegal transactions always make a girl feel dirty, but in the midst of a sexy undercover operation, detective Lux Kassidy frisks jewel thief Zoe Voss, discovering the most valued treasure is between Zoe's legs. The best part of when a couple fights is the make-up sex and when Celeste and Lily have a knock-down, it's a drag of a fight! But that fight turns into an extremely hot sex scene as the girls take out their aggression on each other. They use the whole bed - every inch of it - to satisfy their vengeful lust, but do their own screams of pleasure mask the possible murder next door. Hayden is nervous about her lesbian debut, and Andy promises to take it slow and take her time. Slowly, Andy strips Hayden and once that is done, they don't even make it to the bedroom! The leather couch gets as much of a work-out as the girls do. Dyanna is a suspect and Julia Ann is a cop. Dyanna needs to prove her innocence but as she stands and undresses right before Julia Ann's eyes to prove she's not concealing anything, innocence is not on anyone's mind and a naked dip in the pool leads to a poolside scene that turns the water into steam! At the Thornhill Police Station, these lady-cops aren't always what they seem! Join some of the best clit suckers in the biz as they bring sexy back to the force!

Mother Daughter Exchange Club 8
Those frisky mothers and daughters are at again! Hot young gals and their even hotter moms switch around so everyone can get some action! These moms definitely taught their daughters to share! Darryl Hanah is ready to exchange" her daughter Janie Summers (here dubbed Heather Starlet) for a crack at Kelly Nichols' kid Faye Regan...
£22.00

Mother Daughter Exchange Club 1
Mother knows best in Mother-Daughter Exchange Club 1 - a taboo teasing title where horny mothers and their young daughters cavort with other romance minded mother-daughter pairings! After meeting through a website, mother and daughter Magdalene and Marie McCray arrange a meeting with Cindy and Natasha Lenin. After getting to know one another, the exchange of mothers and daughters can at last begin! Cute redhead Marie pairs up with lusty MILF Cindy - who soon has the youngster up in her room. After plenty of sensual kissing and caressing, busty blonde Cindy feels her way under the young girl's dress and grapples with Marie's perky breasts. A finger of fun soon has Marie's gash gushing before Cindy dons a strap-on and fucks Marie to a thrilling crescendo! Magdalene and Natasha meanwhile have been getting to know one another upstairs. Magdalene seduces Natasha with gentle kissing, stroking and teasing. Removing the teenager's white panties, Magdalene nestles between the girl's thighs dishing out vicious licks to Natasha's slit as these feisty babes writhe their way to a steamy climax. Scene three sees another red-hot pairing of Autum Moon and the sprightly Allyssa Hall. On the bed Autum has Allyssa stripped, playing with the youngster's juicy hole and big round titties. Allyssa ruffles mommie's cunt, her hand diving inside the crotch of Autum's jeans, diddling her in a delicious finger-fucking session. Two hot blondes pair up in the final scene when cutie Hayden Night is seduced by lusty Dia Zerva....
£22.00

Lesbian Hospital 2
Lesbian Hospital 2 is the trusted institution that these lusty sluts check into when they have trouble climaxing. When these babes need a thorough internal examination, there's one trusted name in medicine they turn to - Lesbian Hospital, with it's highly efficient Orgasmic Response Unit. Plenty of hot female interns and doctors are on hand to slip on the latex gloves and fire up the sex toys - the dirty doctors use only the very best in prized instruments of arousal to bring their young patients to multiple, pussy-pulsing climaxes. Lily Lovely gets a pelvic exam, complete with strap-on delivering multiple orgasms, and Lisa Ann gives Heather Starlet a naughty in-home examination!...
£22.00

Net Skirts 1
Net Skirts 1 is a new series from Girlfriends Films centred around a networking internet site where women meet for social and sexual interaction. Scene one Magdalene invites Brooke up to a resort for the weekend. Brooke starts off by taking a bath and, after a quick massage, it doesn't take long for the two ladies to start kissing as Magdalene starts to slowly work her way down to Brooke's waiting pussy. Things move up a notch when Brooke rolls over to be on top, working her way down to Magdalene's juicy slit which she obediently licks and caresses until Magdalene's orgasmic moans fill the room. A very sensual scene guaranteed to stir the passions! On the eve of making a big commitment, future bride Brea contacts Lux to be fitted for a wedding dress. Once the measuring is over though it doesn't take long for the ladies to start kissing and for Lux to start teasing and licking Brea's sensitive skin. Brea goes down on Lux, licking and probing her gorgeous little slit before Brea assumes the kneeling position so she can eat her in doggie. These two put on an intense display of Sapphic love as they rub, lick and tease one another to shattering orgasms. Two further scenes follow with Julia and Shyla demonstrating what women really want and Brenda convincing Samantha that they don't need a man around to have fun....
£22.00